Laser hair removal in New Friends Colony, South Delhi is one of the treatments that are in demand in summer.

This is because the hot weather increases the exposure to the body. This is done for cosmetic purposes because areas such as the armpits and calves give a cool and neat feeling when depilated.

In addition, recently, the demand for hair removal by men is gradually increasing. It is natural for men to have beards.

However, in the past, most of the hair removal was done while shaving, but recently, laser hair removal is increasingly being performed.

This prevents the hair itself from growing out of the hair follicle. Therefore, the effect of the procedure of laser hair removal in Lajpat Nagar, South Delhi is long-lasting. 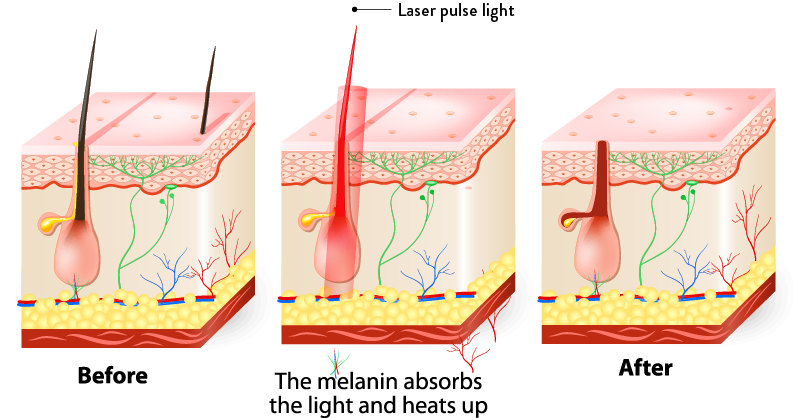 As such, it shows a semi-permanent hair removal effect, but it does not end with a single treatment and requires repeated treatment several times.

The reason is that the resting and active hair follicles are mixed.

Since laser energy acts on the melanin pigment of the hair, it works selectively only on the hair follicle where the hair is growing.

Therefore, it has no effect on resting hair follicles. All hair follicles should be destroyed in sequence by repeating the procedure every 1-2 months.

Waxing is one of the most common hair removal methods. It is a method of physically tearing off the hair by attaching an adhesive component to the skin.

Because it is a very intuitive and simple method, it has been widely used since ancient times.

The problem of waxing

Considering the persistence of the effect and side effects, laser hair removal in South Delhi is a more advanced method than waxing.

Laser hair removal, where is the treatment area?

For women, the armpits and calves are traditionally received a lot. It is a part that is exposed a lot when going to the beach in summer.

For men, there is not a lot of interest in laser hair removal in South Delhi so far.

There is a big perception that you have to shave every day, as a beard comes naturally, and men can look a little weird even if they don’t have hair on areas such as armpits or calves.

However, there are many cases where the hair is shaggy without knowing it.

For example, if you have a lot of down on your face, or those whose beards are growing too fast, it’s easy to feel that something isn’t smooth.

However, laser hair removal in Lajpat Nagar, South Delhi should be considered in the following cases.